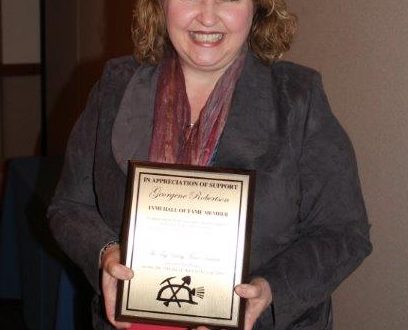 Georgene Robertson, Human Resources representative at Coal-Mac, recently was inducted into the Tug Valley Mining Institute (TVMI) Hall of Fame. Robertson has worked in the coal industry for 31 years, 28 of those at Coal-Mac. She has served as a TVMI board member since 2003, and is a past president of the organization. She has been involved in the Coal Education Development and Resource (CEDAR) coal education program in eastern Kentucky since its inception in 1993, and was instrumental in starting the southern West Virginia CEDAR chapter in 2001. She has served as president of CEDAR of Southern West Virginia and is a member of the national Women In Mining Education Foundation Board. Robertson holds an associate degree from Pikeville College, a bachelor’s degree from Eastern Kentucky University and an MBA from the University of Pikeville.